It’s a superpower’: how walking makes us healthier, happier and brainier

Neuroscientist Shane O’Mara believes that plenty of regular walking unlocks the cognitive powers of the brain like nothing else. He explains why you should exchange your gym kit for a pair of comfy shoes and get strolling

Taking a stroll with Shane O’Mara is a risky endeavour. The neuroscientist is so passionate about walking, and our collective right to go for walks, that he is determined not to let the slightest unfortunate aspect of urban design break his stride. So much so, that he has a habit of darting across busy roads as the lights change. “One of life’s great horrors as you’re walking is waiting for permission to cross the street,” he tells me, when we are forced to stop for traffic – a rude interruption when, as he says, “the experience of synchrony when walking together is one of life’s great pleasures”. He knows this not only through personal experience, but from cold, hard data – walking makes us healthier, happier and brainier. 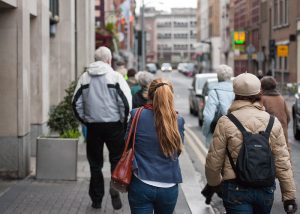 We are wandering the streets of Dublin discussing O’Mara’s new book, In Praise of Walking, a backstage tour of what happens in our brains while we perambulate.

Sitting at a desk all day, it’s easy to start feeling like a brainless polyp, whereas walking and talking, as we are this morning, while admiring the Great Sugar Loaf mountain rising beyond the city and a Huguenot cemetery formed in 1693, our minds are fizzing. “Our sensory systems work at their best when they’re moving about the world,” says O’Mara. He cites a 2018 study that tracked participants’ activity levels and personality traits over 20 years, and found that those who moved the least showed malign personality changes, scoring lower in the positive traits: openness, extraversion and agreeableness. There is substantial data showing that walkers have lower rates of depression, too. And we know, says O’Mara, “from the scientific literature, that getting people to engage in physical activity before they engage in a creative act is very powerful. My notion – and we need to test this – is that the activation that occurs across the whole of the brain during problem-solving becomes much greater almost as an accident of walking demanding lots of neural resources.”